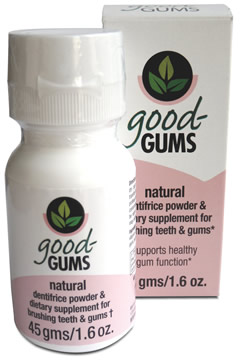 Good-Gums® is a new addition to your oral hygiene program for healthy gums.

What is the worst thing you can do for your teeth? Use Toothpaste!! You read that correctly. Toothpaste contains many harsh chemicals that prevent the teeth from re-mineralising – yes that means repairing themselves. Fluoride is a toxin and should not be swallowed (hence all the warnings on American Products containing fluoride), and along with Glycerin coats the the teeth preventing the them from absorbing minerals and repairing damage. Other harsh chemicals that destroy enamel and gums like SLS (used in garages to remove grease) are also found in even fluoride-free toothpaste. See here for more information on why we should reconsider using toothpaste and switch to Good Gums: Good Gums

Despite brushing teeth and using dental floss and mouth rinses, many people do not have healthy gums (gums are often swollen, bleeding or receding). There are a number or reasons for this including bacterial infection, imperfect brushing/flossing, poor diet, and smoking.

Good-Gums is a dental powder made from herbs and minerals that has been formulated to optimize gum health. Ingredients include baking soda, French grey sea salt, Vitamin C with bioflavanoids, myrrh, peppermint, tea tree, cinnamon and cranberry.

Use Good-Gums after flossing by placing a small amount of powder (about a small pea’s worth) onto a damp toothbrush and brush your teeth in the normal dentist-recommended way, making sure that you also gently brush your gums and around your mouth, making sure that the powder (which will dissolve in your saliva) is evenly distributed. You can spit out any excess liquid but do not rinse as it is important that the Good-Gums ingredients are left in contact with the gums and teeth for as long as possible.

Good-Gums is most effective when used as a toothpaste substitute, on its own. Although some people still like to brush their teeth with traditional toothpaste first before then using Good-Gums. Although this is totally unnecessary and somewhat counter-productive.

The reason it is a powder is that dry ingredients do not need preservatives, which makes Good-Gums preservative-free. In addition to this, Good-Gums is not tested on animals and contains no artificial colors or flavors, no harsh abrasives and no fluoride.

Good-Gums is available in 45g tub which should last around a month and a half to two months.

You can keep your teeth and gums healthy and even repair some damage simply by working with Nature by supporting how the teeth actually work to maintain health and carry out repair. This will be the best dentistry product you have ever bought. Do your teeth and gums a favour, treat them naturally! They will love you for it. Buy Here or by clicking on picture above